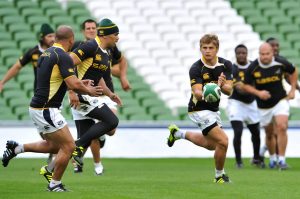 The Springboks is the nickname for the national rugby union team of South Africa. Consistently ranked as one of the best in the world, the team took home the Rugby World Cup in both 1995 and 2007 and has also won three Rugby Championship (previously the Tri-Nations) titles.

South Africa played its initial international rugby match in 1891, but it was in 1906-07 that the Springboks nickname was first used. The team have been commonly referred to by that name ever since. That tour was also the first time South Africa played in their now customary green and gold colours.

It had long been the tradition for South Africa to exclude non-white players from its rugby teams, but during the 1960s, other sides began to take a stand against this, with New Zealand refusing to bring their Maori players during one tour of the country. Unlike in most other sports, there was no blanket ban on South Africa competing because of the apartheid regime. The British and Irish Lions visited the country on several occasions, famously winning a bad-tempered 1974 Test series 3-0.

Apartheid was abolished in the early 1990s, and South Africa was welcomed back into the international fold, being chosen to host the 1995 Rugby World Cup. The home side famously won the whole competition, with the image of Nelson Mandela presenting captain Francois Pienaar (a white Afrikaner) with the trophy, while wearing a Springbok shirt, going down in modern history as one of the symbols of the new era in South Africa.

The Springboks repeated that triumph 12 years later in France, beating England in a low-scoring final. In recent years, South Africa haven’t quite managed to hit the same heights, but they are still ranked among rugby union’s very best international sides.