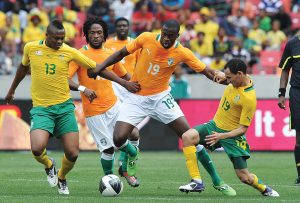 As with many other countries which were formerly part of the British Empire, sport is big in South Africa. In this article, we’ll take you through the country’s five most popular sports.

The most popular sport in the world, football is loved by people across South Africa. The national team won the 1996 African Cup of Nations and has qualified for three World Cups, including the 2010 edition, when the country became the first in Africa to host FIFA’s blue riband event.

South Africa is traditionally one of the best rugby union-playing teams in the world. They have won two Rugby World Cups so far, one as host nation in 1995, and the other in 2007, when they defeated reigning champions England in the final in France. South Africa, who are known as the Springboks, have also won three Rugby Championship titles.

Regularly ranked as one of Test and One Day International cricket’s best teams, South Africa have had a tendency to fail when it really matters in Cricket World Cups. They are yet to win or even make the final, of a 20 or 50 over tournament.

There are several world-class golf courses in South Africa, and the country has also produced plenty of superstar professional golfers, including Major winners Arnold Palmer, Ernie Els and Retief Goosen.

Several world-famous athletes who have enjoyed success at both the Olympic and Paralympic Games hail from South Africa. Oscar Pistorius and Caster Semenya are probably the most well-known, but the country has also won medals in several other athletic events, including Wayde Van Niekerk in the men’s 400m (he broke the world record for the event in the Rio de Janeiro Olympics). In total, South Africa has won nine gold medals, 13 silver and seven bronze medals.