In order to adapt to age, the Swiss tennis player has changed the playing technique in the current decade. From 2014, he changed the racquet size from 90-inch to 97-inch. This allows Federer to maintain his free swing style and minimize the number of mistakes. His one-handed skills are fully developed to a new level of weapon and become a “destructive” weapon.

That helped Federer improve the situation in the rivalries with Nadal. In the Australian Open 2014, Nadal is in a head-to-head advantage when leading 23-10 to Federer. But the “Express train” miraculously reversed when it won six of the seven matches since. The only loss among them was in the semi-finals of Roland Garros in the 2019 season, which marked Nadal’s 12th championship here. 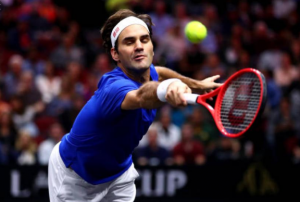 With Andy Murray, in the current decade, Federer also showed complete overwhelming when winning 10 of 15 times facing former Scottish number one player. Before Djokovic, though not dominant (Federer was 14-21 in the head-to-head ratio), FedEx still marked with decisive victories. He cut off Djokovic’s 43 consecutive victories in the semi-finals of Roland Garros 2011.

The “express train” also won both of the last two meetings at the ATP Finals, including the match in the group stage last month. That defeat also made Djokovic lose the opportunity to end the 2019 season in the number one spot in the world.

At Wimbledon this year, before the age of 38, Federer, despite holding two match-points in the final, ultimately failed to take advantage to defeat Djokovic. Even so, the Swiss tennis player still proves he is still very strong.

Before the top 10 competitors in the world, Federer has 104 victories in the current decade, including 23 cumulative wins against Djokovic (14 matches) and Nadal (9 matches). Except for the absence of 2016 due to a knee injury, every year, he has enough points to attend the ATP Finals – the year-end tournament that Federer won twice (2010 and 2011).

The total number of ATP titles won this decade by Federer is 42, second only to Djokovic (60) and Nadal (48). He is also the most champion of the pitch during this time with a total of 8 titles.

Ending in 2019 at the age of 38, but Federer shows he is still one of the best players in this top sport.