Despite the age and rise of their rivals, Roger Federer has remained the world’s number one champion for 237 weeks and five times ending the season atop ATP in the last decade.

The “express train” started in 2010 at the age of 29. It is common sense that the burden of age will greatly affect the performance. That was when Novak Djokovic and Rafael Nadal were making great strides.

However, the Swiss tennis player has overcome doubts about his performance to claim the top position in the world. In the current decade, since 2010, Federer has won 42 ATP titles, including five Grand Slams, 12 Masters 1000 and two ATP Finals. 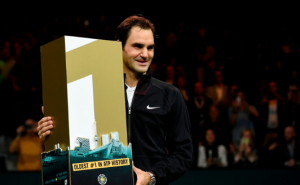 After the failure of the 2016 Australian Open semifinal, Federer suffered an injury and underwent laparoscopic surgery. He played only five tournaments for the rest of that season. The defeat of Milos Raonic after five sets in the 2016 Wimbledon semifinals also quickly closed Federer’s season.

That was the reason why he was relegated to 17th in the world in January 2017, before the Australian Open. There have been many predictions Federer was eliminated early when coming to Melbourne Park.

At that time, he was 35 years old, and history only recorded a player older than Federer ever won the Grand Slam (Ken Rosewall at the age of 37) and no one held the number one world number at that age. Swiss tennis players enter the tournament with the mentality is simply happy to have the opportunity to play.

But, not only was he crowned at the 2017 Australian Open, Federer went on to crown at Wimbledon that year, and hit the 20 Grand Slam milestone when defending the title in Melbourne the following year.

A month later, by reaching the semi-finals of the ATP 500 in Rotterdam, Federer returned to number one for the first time in 5 years 106 days. It was a record for the longest period of time between two times at the top of the ATP rankings. That also makes Federer the oldest player to become number one in the world, knocking down Andre Agassi’s similar record at the age of 33.