On June 9 Rafael Nadal defeated Dominic Thiem with the score 6-3 5-7 6-1 6-1 in the Roland Garros 2019 final, leaving the 12th time to win this tournament – through which set an unprecedented record of world tennis. 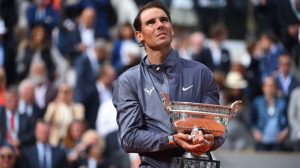 Notably, this is the second time in a row, Rafael Nadal and Dominic Thiem face each other in the Grand Slam final on clay. Last season, Nadal won the match 3-0 against the Austrian player.

This encounter, despite the effort and determination, but Thiem has not been able to reclaim the debt and failed to find the first Grand Slam title in his career.

Thiem is not bad when it comes to leading 3-2. However, Nadal quickly reclaimed the break in game 6, before going up to lead 5-3, then winning 1 set with the score 6-3.

The Austrian player was surprised when he won the second set with the score 7-5. This set show Rafa’s instability at the time of making decision.

The next two sets, Nadal played overwhelmingly and won quickly with the same score 6-1 to close the final with a 3-1 victory, after 3 hours of competition.

With this result, Nadal continues to affirm the position of “the king of clay” for the twelveth time to win Roland Garros, an unprecedented record of world tennis.

In particular, he won all 12 finals and increased his achievements in the tournament to 93 wins, 2 losses, winning rate of nearly 98%.

Like Usain Bolt at the marathon, Michael Phelps of swimming, Rafa Nadal was born to dominate clay courts in Paris.

Roland Garros 2019 raised Nadal’s Grand Slam collection to eighteen, less than twice the record of his rival Roger Federer (Swiss tennis player). An overthrow is really possible, as Rafa is revived both physically and mentally.