When applying a new format from the 2019 season, the record long match in Wimbledon will now only be the past. 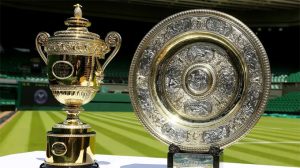 From Wimbledon 2019 onwards, all matches apply the tie-break format with the score of 12-12. This new regulation takes effect in all competitions of men, women, young and wheelchairs.

The reason given for the series tie-break set?

This proposal was reiterated after last year’s Wimbledon semi-final between Kevin Anderson and John Isner lasting up to six and a half hours, with the set of decisions ending at 26-24 and longer than 3 hours.

That made the women’s singles final of Serena Williams and Angelique Kerber 2 hours back. And then less than 48 hours later, Anderson rode again to play against Novak Djokovic to compete for the men’s singles cup with a poor, unattractive performance.

One of the longest record matches in Wimbledon history is witnessing John Isner defeating Nicolas Mahut with a score of 70-68 in the fifth set in the 2010 season.

When to apply series tie-break?

When the score in the set (set 3 in the women’s content, set 5 in the men’s content) draw 12-12 then apply the final tie-break series.

One of the players will hand the ball from the 25th game of the last set. This tie-break series still follows the “touch seven” law. It means that the player who scored 7 points first will win, if he draws 6-6 then he will continue to play until he can make a difference of 2 points.

Normally, the tie-break series is applied when the score is 6-6 in the final set, however in Wimbledon it is pulled again until 12-12.

Philip Brook, chairman of the England Lawn Tennis Club (AELTC), said: “We see that the series of tie-breakes that appear from the 12-12 draw in the decisive set is necessary and appropriate. The players still have a chance to win the traditional game, and are not fatigue due to the long duration of the match.