Menu
You are Here:
Home
>
Basketball
>
Kobe Bryant believes that Giannis Antetokounmpo is a formidable player at NBA

The Los Angeles Lakers legend recently issued a warning to all NBA teams, so beware of a “hurricane” named Giannis Antetokounmpo that will sweep any team next season. 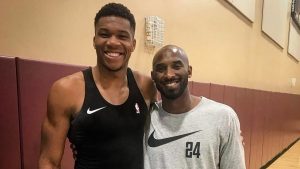 Although there are no positive results with the Greek team at the FIBA ​​World Cup 2019 taking place in China not long ago, Giannis Antetokounmpo is still a player who receives a lot of media attention, especially was after he won the individual MVP title last season.

In a recent share with The Athletic, Kobe Bryant not only did not care much about the results of the Greek team, but also issued a warning to the remaining 29 teams in the NBA tournament so they should prepare appropriate tactics to deal with “Greek god”.

The reason Black Mamba made such a warning is justified when the Lakers legend had time to practice with the Greek player last summer, Kobe’s experiences and instructions helped “Greek god” to achieve great achievements this season. The MVP title given to Giannis was not unexpected by the former Lakers player when he knew it would happen:

“That boy was very special, he was really serious about his desires. Remembering the time last summer, when Giannis and I had a short training period together (1 hour and 30 minutes).

Unlike most players I’ve met, Antetokounmpo took out his writing and carefully wrote down what I wanted to convey, which really made me respect him a lot. With such a progressive spirit and willpower, Giannis’ achievements today do not surprise me “- Kobe Bryant expressed his admiration for the Greek player.

Not only that, Black Mamba believes that Giannis will go further in the future, more specifically in the 2019-2020 season, the 25-year-old will lead Milwaukee Bucks to “sweep” the tournament like the team. The ball did last season with first place in the Regular Season. Playing 65 matches for the home team, the player who has been in All-Star 3 times brings in “terrorist” scoring performance: 27.5 PPG, 12.7 RPG, and 6 APG.