Menu
You are Here:
Home
>
Basketball
>
Los Angeles Lakers is expected to be sucessful this season

Leaving behind the forgotten season, the Los Angeles Lakers are expected to explode in the upcoming NBA 2019-20 season although DeMarcus Cousins ​​has just suffered an ACL injury. 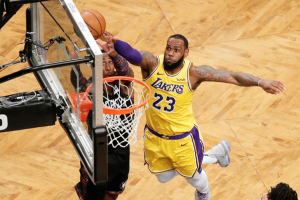 After signing a contract with LeBron James in the summer of 2018, the expectations of Los Angeles Lakers fans were pushed to the clouds. However, the purple-yellow shirt team went through a relatively disappointing 2018-19 season.

With the injury and the inexperience of the players, in addition to the lack of consistency in the leadership, the LA Lakers led to the sixth consecutive season sitting outside the Playoffs. However, everything was left behind when the team brought about a series of changes and additions in terms of personnel.

Rob Pelinka now has full control over the board and the first two moves he offers are to hire coach Frank Vogel and bring Anthony Davis to the LA Lakers. Not long after, Vogel’s squad was given a series of quality names such as Danny Green, Avaery Bradley or Jared Dudley and DeMarcus Cousins. Suddenly, the yellow and purple shirt team returned to the championship race and the expectation returned to the old, high clouds.

Now that the pieces are relatively complete, all will depend on coach Frank Vogel’s teachers when the 2019-20 NBA season begins. But before Regular Season officially kicked off in two months, ESPN’s computer system began working to make predictions about the number of victories the teams achieved.

Accordingly, the Los Angeles Lakers’ 6-year thirst for Playoffs is expected to end in the NBA 2019-20 season.

The results show that the Los Angeles Lakers will have about 46.6 wins, with the NBA Playoffs 2020 reaching 85%. These numbers put LeBron James and teammates right above Stephen Curry along with the Golden State Warriors with 46.5 wins and below Utah Jazz with 46.7 victory matches.

The two leading teams in the West are expected to be the Houston Rockets and Denver nuggets with the same 53.8 wins. The Los Angeles Clippers with the All-Star duo Kawhi Leonard and Paul George are third with 48.0 sucessful matches.