Italian coach asked Chelsea to release the contract, after reaching an agreement with Juventus, and decided to come back his hometown. 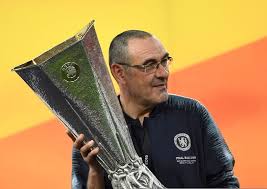 Fali Ramadani, Maurizio Sarri‘s representative, met Chelsea leader on May 31 to discuss the future of the Italian coach. According to Goal, Sarri has reached an agreement to become the new Juventus coach from the 2019-2020 season and asks Chelsea to release the contract to move to Juventus. The “Elderly” salary for Sarri is $ 8 million a season.
In the middle of the week, Chelsea manager Bruce Buck met Juventus President Andrea Agnelli in Baku just before the Europa League final. According to Tuttosport, the meeting is related to Sarri’s future.
According to Goal, the biggest problem in Chelsea‘s acceptance of Sarri’s departure is in the position of a substitute. The owner of Stamford Bridge wants a talented new coach, able to hold the dressing room. They are now putting old Frank Lampard in sight. He has just helped Derby County enter the promotion playoff final, before losing to Aston Villa. If Lampard accepts to return to London, Sarri will be allowed to leave.
Sarri went to Chelsea in the summer of 2018. He impressed the first stage by playing a liberal attack and the philosophy of controlling Sarri-ball. However, at the end of the season, other English clubs understand this style which made Chelsea difficult to play. The blue shirt team lagged behind in the Premier League championship race, causing Sarri to face great pressure. Until this week, the new 60-year-old coach was relieved by winning the Europa League.
Achieving the European Cup and finishing third in the Premier League is not a bad achievement for Sarri. This helped him become Juventus coach chosen instead of Max Allegri, when Pep Guardiola, Mauricio Pochettino and Jurgen Klopp were not interested in going to Turin.