Menu
You are Here:
Home
>
Soccer
>
The 2019 Copa America champion is just the beginning for Brasil

A world-class football and a thirst for glory like Brazil obviously cannot be satisfied with the 2019 Copa America championship. That’s just the beginning of their ambition, the 2022 World Cup is the ultimate goal. 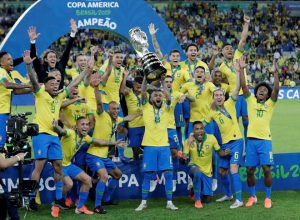 Those who look at the final score of the final may be deceived. It is true that Brazil has won 3-1, but Peru is not a weak opponent. The performance of the most surprising team of Copa America 2019 in the final is extremely impressive.

Not many stars, not appreciated, but Peru has caused a lot of difficulties for Brazil – the host of the tournament and take all advantages. The goal from veteran Paolo Guerrero in the final was only the first time in this tournament, Coach Tite’s team was conceding.

No longer a foolish Peru when they lost to 0-5 in the group match, Machu Picchu’s homeland team played a brave football, with a spirit of competition. They eliminated both Uruguay and Chile without ever conceding, and at least during the early part of the final, making Brazil sweaty.

But it is no coincidence that under the Tite era, the Brazilian team has only lost 2 matches in the last 3 years. One in the 2018 World Cup quarter-final against Belgium, one in the friendly against Argentina. The coach has started his coaching career since he was 30 years old and is known for his fervor of pragmatism, flexibility, and winning the first place. Another Carlos Dunga of Brazilian football. But modern and much more dangerous.

The debate about how beautiful Brasilian football has not ended, and will never end. But when Brazil lost to Belgium – a European team in the 2018 World Cup quarter-finals, it only reinforced Tite’s belief in the football he built.

Brazil will play pragmatically to achieve results. Not a football, a fancy color or trying to control the ball. In the 2019 Copa America, they have minimized every mistake, played firmly despite having a superior force compared to the rest. But Copa America, the tournament that has been held three times in the past four years, is only the beginning, the World Cup in the next 3 years in Qatar is the highest goal.