Menu
You are Here:
Home
>
Soccer
>
Messi was fined for claims over Conmebbol

On August 2, the South American Football Federation (Conmebol) issued a three-month ban and a fine of $ 50,000 for Argentine football star Lionel Messi for accusing the organization of corruption and arranging for Brazil home team crowned at the Copa America. 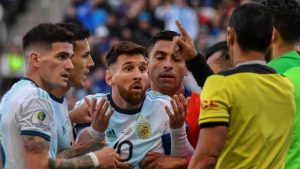 Compared to the fine a week ago, Conmebol impose a stricter one. Earlier, the Argentine superstar was banned from playing one match, due to the red card received at the match against Chile, with a fine of 1,500 USD.

Messi played unsuccessfully in the Copa America 2019. He only scored one goal from 11m, while Argentina lost to Brazil in the semifinals. After this match, the 32-year-old superstar accused the tournament of being negative, and “Brazil is scheduled to win”.

After winning Chile in the match for bronze medal, Messi refused to receive award. He also said that being red carded in the match against Chile was the result of previous statements. At the interview after the match, the Argentine captain called the Copa America 2019 “corruption tournament”.

The Argentine striker star did not appear at the medal ceremony because he thought “not wanted to be part of the corruption team and disrespect for Argentina during the tournament.” Messi’s criticism is considered “unfounded” and “disrespectful”, according to a spokesman for Conmebol. The Golden Ball owner has seven days to appeal the continental union’s decision.

Coach Tite said he admired Messi, but not satisfied because of the above statement. Former teammate Dani Alves criticized Messi for being too angry. Meanwhile, Gabriel Jesus and Thiago Silva also attacked Messi for denying the efforts of the Brazilian team.

During the penalty period, Messi will not be able to play alongside Argentina in friendly matches against Chile and Mexico, scheduled to take place in November.

Argentina started the 2022 World Cup qualifier from March 2020. Therefore, Messi can still attend from the beginning of the campaign. He missed only three friendly matches of “La Albiceleste” in 2019, including Chile (September 5), Mexio (September 10) and Germany (10/10).