Facing the invincible Barcelona on the Nou Camp, MU hardly have the opportunity to surprise the audiances like the way they eliminated PSG from the Champions League semi-quarter round. 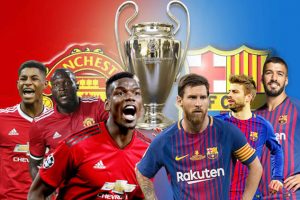 In the fist leg last week, despite playing faintly and lacking in the eye-catching attack arrangements, Barcelona still got a humble victory 1-0 over the Red Devils.

There are huge advantages, but coach Valverde is not subjective, especially after seeing Solskjaer and his team perform spectacular retrograde displays on the Prince Park last month.

The Spanish rulers have hidden his main team (except goalkeeper Ter Stegen) in the match against Huesca recently. That means, Messi, Suarez, Pique stardom … will keep the best physical fitness before the game with MU.

Solskjaer and his students were not so comfortable, because they still struggled to fight the top four Premier League races. Launching the team with the most powerful form but it must be hard, the Red Devils beat West Ham 2-1 thanks to Pogba’s double on 11m.

Their victory increases the chance of winning the Champions League ticket next season, but somewhat reduces the combat capacity of MU, especially when the season enters the final stage of the dense schedule.

The worn-out health results in the feet caused problems in the head. As a result, MU’s kicking way became monotonous and could not impose aggressive attacking play as at the beginning of the year.

The march to the Nou Camp is forecasted to be very intense. The Asian bookie hardly believes in an overthrow of the Red Devils when it applies a considerably different handicap (0: 1 1/2).

MU made a miracle in Paris, but Barca is not a dream like “rich man” PSG. The Catalan team has never failed at the Camp Nou since the 0-3 defeat to Bayern Munich in 2013. In particular, through 30 consecutive games on their home stadium in the Champions League, Barca won 27 and only tie 3 matches.