Menu
You are Here:
Home
>
Soccer
>
7 mistakes of Real Madrid in the transfer market

Real Madrid is a big name in the soccer arena but is said to have just gone through an unexpected transfer. The reasons is indicated by 7 notable mistakes. 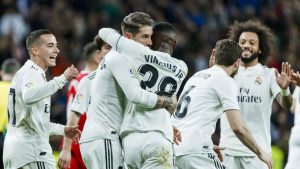 1. Excessive spending
Real Madrid spent 305 million euros on six players (Hazard, Jovic, Mendy, Militao, Rodrygo and Kubo). But now, this investment is in doubt because they bet too much on the future, while in some cases it does not indicate the urgency to buy.
2. No revolution
Real Madrid only signed a star in the true sense of Eden Hazard, both in transfer fees and reputation. The current squad in Zinedine Zidane‘s hands is almost identical to 2014, which shows that their forces have not grown.
3. Can not buy a coach-preferred player
Zidane’s number one goal during the summer was Paul Pogba not being met. In other words, Real Madrid refused to pay a large sum of money to the French midfielder despite the need for someone to compete with Toni Kroos and Luka Modric, 34 years old.
4. Waste mid-range players
Zidane had Sergio Reguilon, Mario Hermoso, Martin Odegaard, Pablo Sarabia, but left in different ways. It is a great waste compared to the value of Real Madrid.
5. Unbalanced force
Real Madrid did not add any more midfielders meaning that they only owned four pure midfielders – Casemiro, Modric, Kroos and Valverde after selling Llorente and loaning Ceballos. In contrast, up to 9 offensive players lead to excess.
6. Can not sell “branded goods”
Although Gareth Bale and James Rodriguez have stayed and may be useful to Real Madrid, it was Zidane’s reluctant decision. Los Blancos failed to sell the duo at affordable prices but received a very high salary.
7. Noone can substitute Casemiro
The position of the defensive midfielder of Casemiro has very few substitutions after selling Llorente. Kroos is also used there but there is doubt about his effectiveness.