Menu
You are Here:
Home
>
Sport news
>
Many countries call for postponement of the 2020 Olympic Games

Many sports events were postponed because Covid-19, athletes were mentally depleted and their health prevented countries from preparing well for the Tokyo Olympics.

France is among many countries that restrict people from moving, due to the influence of Covid-19. According to this country, if the Olympic Games 2020 continues, “fairness in sports can hardly be guaranteed”.

Earlier, the US Swimming Federation also urged the Olympic and Paralympic Committee of this country to postpone the festival in Tokyo. “We are calling on them (Olympic and Paralympic Committee) to speak out for the athletes. They are all under tremendous pressure, just a few months before the tournament starts. who should be first, “CEO of American Swimming Federation Tim Hinchey said. 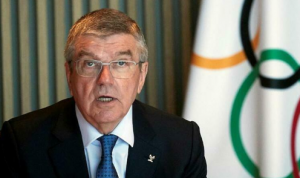 Earlier this week, the IOC said only about 57% of the athletes won the right to attend the Olympic Games. President Thomas Bach acknowledged in the New York Times, that the IOC was considering every scenario for the 2020 Olympic Games. However, he stressed that it was “too early” to decide to postpone the Olympics.

International Olympic Committee President Thomas Bach believes the 2020 Olympic Games will take place on schedule because its scale is too great.

The complicated course of Covid-19 threatens many sporting events. Football tournaments have been postponed, while Euro 2020 has been postponed to 2021. F1 races are also canceled or postponed. However, Bach said that the complex scale of the Olympics made it impossible to postpone.

Although the IOC President is so determined, the possibility of the 2020 Olympic Games in Tokyo remains skeptical. Europe and the United States are badly damaged by Covid-19. The plague prevented athletes from exercising as planned when many countries banned the gathering of people.